The Constitutional right to obtain a patent is subject to certain limitations, including that an inventor may be barred from obtaining a patent if the invention was sold or publicly disclosed prior to filing the patent application. The America Invents Act (“AIA”) changed the statutory language of 35 U.S.C. section 102 regarding when a prior disclosure may bar an inventor from receiving a patent.

My article discussing this was published on Law360.com.  The text of the article is set forth here:

Section 102(a) is clear and appears to provide a bright line test for determining when a disclosure precludes an applicant from receiving a patent. Section 102(b), however, sets forth exceptions that blow a cloud of smoke over the clarity of Section 102(a).

THE GRAY AREA
Section 102(a) provides clear rules for determining activities that may bar an inventor from getting a patent: the invention was described in a patent, printed publication, or was in public use, or on sale before the filing date of the patent application.

Congress wrote the statute with vague and confusing language, leaving it up to patent examiners at the U.S. Patent & Trademark Office (PTO) to interpret and implement the statute. Patent examiners often are not attorneys, and it is not their job to interpret obtuse statutory language. But, being on the front lines, PTO had to come up with some rules to deal with this statutory mess. Therefore, the Manual of Patent Examination Procedure (“MPEP”) provides a working definition of the word “disclosure”, stating:

“[T]he Office is treating the term “disclosure” as a generic expression intended to encompass the documents and activities enumerated in 35 U.S.C. 102(a) (i.e., being patented, described in a printed publication, in public use, on sale, or otherwise available to the public, or being described in a U.S. patent, U.S. patent application publication, or WIPO published application).”  See, MPEP 717.

(a)Novelty; Prior Art. — A person shall be entitled to a patent unless –

Section 102(b)(1) provides exceptions to this rule, stating that certain disclosures made within one year of filing the patent application will not preclude an inventor from getting a patent. This time frame is often called the “Grace Period”.

In particular, under section 102(b)(1) if the inventor, or a joint inventor, publicly disclosed the invention within one-year prior to filing the patent application, the patent may still issue. These inventor-initiated public disclosures will not bar the applicant from receiving a patent.

SUBJECT MATTER DISCLOSURES – SECTIONS 102(a)(2) and 102(b)(2)
The AIA changed the U.S. from first-to-invent to first-to-file. The legislative history of the AIA shows that the exceptions found in Section 102(b)(2) were written to deal with the situation where an inventor, or joint inventors, previously filed a patent or patent application that disclosed an invention that is also disclosed in a subsequently-filed patent application. As explained in the Congressional Record, the “first-to-file system” may be more properly characterized as a “first-to-disclose system”.

Section 102(b)(2) discusses “subject matter” disclosures, and provides that even if a pre-existing patent or patent application discloses the subject matter of the applied-for-invention, an applicant may still be entitled to a patent.

U.S. PTO CHART
In addition to providing a working definition of “disclosure, the PTO provided a chart in of the exceptions found in 102(b). This chart is a nice summary of some complex concepts found in Section 102. 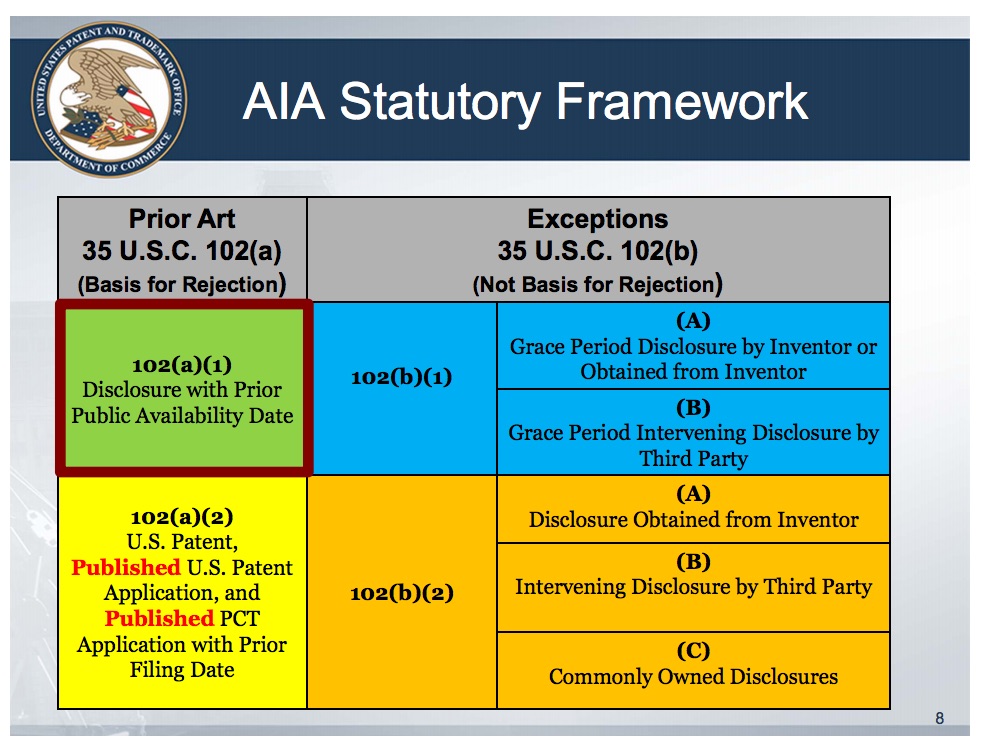 LIMITED CASE LAW
There is limited case law discussing 35 USC § 102 under the AIA since the statutory changes are relatively new and are working their way through the court system.

However, the story was not over. MBI continued to sell its product, and MyGo sued for infringement of its issued patent. MBI asserted a counterclaim that MyGo’s patent was invalid under 102(a)(1), alleging that MBI used its invention on a public beach prior to the date MyGo filed its patent application.

The court analyzed this and found that MBI stated a valid claim, even if MBI’s public use was during Grace Period found in 102(b)(1). Public use by MBI is not use by the inventor (MyGo), and therefore the exceptions found in 102(b)(1) are not relevant. And, although the court did not discuss this, the exceptions found in 102(b)(2) also did not apply — there was no disclosure by MyGo to MBI. Therefore, the court denied MyGo’s motion to dismiss MBI’s counterclaim, and MBI is pursuing its attempts to invalidate MyGo’s patent based on MBI’s prior use.